A tale of a warrior princess and her magic ears 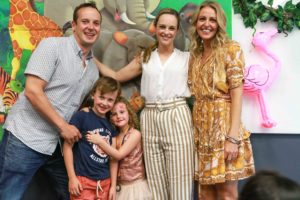 Each year at Graduation, parents of the graduating children are invited to speak.

This year, parents of Olive O’Hagan, aged 5, delivered their speech in the form of a fairy tale, as their daughter loves princesses.

Presented at the Macquarie Graduation ceremony held at Cochlear HQ, the speech shared Olive’s moving journey and it’s safe to say there was not a dry eye in the house.

With the families’ permission, we’ve reproduced the speech here:

A tale of a warrior princess and her magic ears

Olive’s most favourite thing in the world is princesses.

Being a princess, dressing up as a princess and everything in between.

ONCE UPON A TIME in a magical land far far far away called “the Northern Beaches”, a beautiful baby girl was born on to the King and Queen of North Manly called Olive Maye O’Hagan.

The Princess was so teeny tiny that the fair maidens in the hospital called her a gumnut baby and marvelled at her porcelain face. But the King and Queen knew that this small size would soon give her magical powers that very few had in the land.

As Princess Olive was in the Royal Palace news had been returned to the King and Queen that their gumnut baby had hearing loss and that she was to be fitted with hearing aids.

The King and Queen set out immediately on their wild horses to find out where Princess Olive could get the best help for her to live a very normal royal life.

They didn’t have to search for long when one of the Royal Advisers had mentioned a magical land where children go for early intervention to learn to listen and for verbal therapy and go on to live the most beautiful royal lives.

It was called The Shepherd Centre.

And there the King and Queen found it, perched high on a hill underneath the arc of a rainbow surrounded in a haze of fairy dust with magical unicorns opening its door for them as soon as they arrived.

They joined The Shepherd Centre family where Princess Olive went every week of her life. How could one place have so many magical unicorns that were there simply to help their Royal Princess listen, speak and all the support that was needed for the King and Queen?

After much progress, at 18 months old, and quite suddenly one night in the Kingdom of the Northern Beaches some dark magic was performed on Princess Olive and she completely lost all of her hearing.

What kind of sorcery was this?

It was a dark day with such news and even the sun struggled to shine for some time. With such devastating news, The Shepherd Centre and all of their magical unicorns were there for Royal Family doing everything they could.

They knew of a wizard in an ancient land across the bridge who could perform an unbelievable spell that could change Princess Olive’s life forever.

The wizard’s name was Dr Kertesz, and within two weeks Princess Olive had received two of the most beautiful things she had ever come across. They were shiny, they had flashing lights on them and they fit perfectly to her head only.

It was like she was Cinderella.  They were called cochlear implants and they were indeed as she still describes them to this day …“her magic ears”.

And magic they were. From the day the magic ears got switched on Princess Olive was a different girl. Her confidence came out, her determination was strong and she was sure of one thing and one thing only… she was going to talk for all the kingdom to hear.

The King and Queen began to breathe again. Slowly each individual worry they had about the future of the Princess started to go the more they knew what she was capable of and what she could achieve.

There was a time during those dark days that they didn’t know if Princess Olive would be able to hear ever again.

Hear the sounds of the sweet birds singing to her at her window sill each morning or her brother’s giggle, and how he would tell her how proud he was that he was the only one in the Kingdom to have a sister with magic ears.

Another four and a half years went on with weekly visits to the magical unicorns at The Shepherd Centre.

It was hard for Princess Olive.

Each week didn’t come without its challenges and speech sounds that sometimes seemed to be so far out of reach, there were days that the King and Queen longed for that moment where she would be able to chat to her Prince brother without any help, or chat to the Palace staff and tell stories of what she had done that day in the Palace gardens.

But her hard work and sheer determination paid off. She would often wake in the morning to her mother walking in and tell her a perfect sound that she had struggled with. She had obviously been practising and was determined by daybreak that she would conquer it.

She adores her brother Aengus. He often reads her a book at night and to know that she can sit there now and LISTEN is truly magical.

She is so excited to go to big school next year where her Prince brother attends.

She has the most beautiful group of friends who look out for her and her magic ears.

She will go very far this Warrior Princess.

She can achieve it all.

And it’s all thanks to the magical unicorns at the Shepherd Centre. The King and Queens lifeline.

So it’s now time for the princess to close this chapter and start a new royal journey where she will live happily…ever…after!