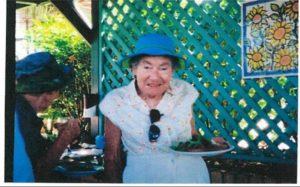 Cynthia Brew was an only child who grew up in Lindfield, Sydney. She had a near idyllic childhood growing up in the great outdoors. Her father and uncle both fought in the First World War and were veterans of Gallipoli. Her mother migrated from England in the 1920s.

Cynthia attended Hornsby Girls High and even then showed the qualities that would define her life – a bright, inquiring mind and a passion for the outdoors and physical pursuits. She trained as a physical education teacher and was fortunate, as a young teacher, to attend the 1956 Olympics in Melbourne. She was also a proud volunteer during the Sydney Olympics in 2000.

Both Cynthia’s parents died before she was 30. Perhaps this sadness contributed to her lifelong determinedly independent take on life. Her spirit of adventure saw her teach in many places including Newcastle, Bathurst, Sydney and Tasmania and she travelled widely and extensively over her life. She also furthered her education by obtaining a master’s degree.

In retirement, Cynthia kept up her interests and also contributed to her community as a volunteer. She was a Justice of the Peace, a former Meals on Wheels volunteer and, for many years, a volunteer guide at Don Bank Museum in North Sydney. She volunteered to practice conversational English with a lady who was an immigrant to Australia. She participated in many clubs and associations – the Bush Club, Historic Houses Trust, the North Shore Historical Society, Geographical Society of NSW and Trumps Bridge Club. She played golf and bowls and continued to follow cricket. She had a very soft spot for Ricky Ponting! She also continued to travel. She took her last cruise at Christmas 2016 and her last ‘historic houses’ trip away in May of 2019, the year of her death.

For someone who so loved physical activity it was a cruel irony that in her final years she had many physical problems. However, she bore her illnesses with stoicism and her customary determination to lead the most independent life she could.

In her lifetime, Cynthia supported many charities and cared particularly for children in need of support. Although her regular donations to The Shepherd Centre were modest, in her Will she was incredibly generous. She also included twelve other charities, each receiving a small percentage of her estate. Cynthia’s gift is currently contributing to our early intervention programs, supporting children with hearing loss to develop their listening and spoken language skills so that they can reach their full potential in life.

Cynthia is a perfect example of the fact that you do not need to be extremely wealthy to remember a charity in your Will and that just a small percentage of your estate can make a life-changing difference.

To learn more about leaving a gift to The Shepherd Centre in your Will, click here or contact our Planned Giving Officer, Samantha on 02 9370 4470 or at [email protected]