World Hearing Day – Friday 3rd March 2017: The results of an Australian-first study into the education, employment and social outcomes of hearing impaired children who receive early intervention therapy have been revealed today – marking World Hearing Day. The study, completed by First Voice, reveals that around three in five (62%) of those with a hearing impairment who receive early intervention go on to achieve a tertiary level qualification. This compares to only two in five (43.3%) of the general population¹.

In addition, the majority (77%) of respondents have been in regular employment for a period of at least six months between 18-28 years of age¹.

Research conducted by Deloitte reveals that for every dollar invested in a First Voice early intervention program, there is a $2.20 return on investment. These benefits include wellbeing, economic gains and financial benefits*².

The analysis covered both short term (improvements in wellbeing) and long term factors (increased income due to improved employment and educational attainment, childcare, avoided school costs and other avoided losses). The research demonstrated an estimated saving of over $60,000 in avoided school costs achieved through childhood participation in early intervention therapy².

“We now have evidence highlighting the increased productivity and achievements of our graduates not just as they enter primary schools but into adulthood as well. The evidence shows that children receiving early intervention support mature into productive members of society with high levels of education, social participation and full time employment, in spite of their hearing loss,” said Mr Hungerford. 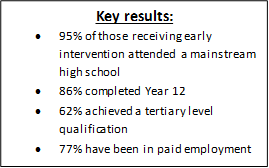 “It is important to ensure that we are setting deaf and hearing impaired children up for lifelong success by providing access to early intervention support services. This is something we are unsure will be provided in the current and future funding arrangements.”

The Shepherd Centre has an extraordinary track record when it comes to giving deaf children access to sound and speech, with over 90 per cent of the centre’s graduates heading to mainstream schools with outstanding communication skills.

Deafness is one of the most common disabilities diagnosed at birth, affecting one in 1,000 Australian babies born each year.

It costs almost $20,000 per year to provide the essential early intervention therapy needed to help just one deaf child learn to listen and speak, and to reach their full potential.

As a charity organisation, The Shepherd Centre relies heavily on public donations to fund over half of this cost. To help The Shepherd Centre continue its life-changing programs for children and young people with hearing loss, visit www.shepherdcentre.org.au or call 1800 020 030.