Anything is possible – Marc and Cailin’s Story

When Marc and Cailin’s son, Harry, was four days old he didn’t pass the newborn hearing screening. He took the test again, at two weeks old, and again he didn’t pass. The third test confirmed their fears, that their son had hearing loss.

“We were referred to the hospital for diagnostic testing. They diagnosed Harry with bilateral profound hearing loss at eight weeks of age. Marc and I were absolutely shattered.

“We suspected he had a hearing loss but we didn’t think it would be to that degree. We were told that Harry’s only hope was a cochlear implant, as hearing aids wouldn’t provide him with sufficient sound.”

A whirlwind of medical appointments followed the diagnosis and lead Cailin and Marc to The Shepherd Centre’s Canberra centre.

“The minute we walked through the door we felt at ease. All the staff there made us feel so welcome, answered every question we threw at them and not once did we ever feel like they were pressed for time. They felt like family and the support they gave from day one was truly humbling.”

The hardest part of the journey for the family was the uncertainty surrounding Harry’s diagnosis; it was not clear if he would qualify for cochlear implants however the results from the MRI later established Harry as eligible.

“Instantly he put our minds at ease and we knew that he was the doctor we wanted to operate on our son.”

The months leading up to the operation were extremely difficult for the family, knowing Harry was to undergo cochlear implant surgery at the delicate age of six months.

“We have never encountered an organisation like The Shepherd Centre that is so committed and passionate about the work they do. The support we feel from each and every staff member is overwhelming.

“From the beginning, Marc and I both knew we wanted to raise funds and awareness for the brilliant work The Shepherd Centre does for children like Harry. They have made a massive impact on our lives already and know they will continue to do so whilst Harry undergoes therapy over the next five years and we want to give something back.” 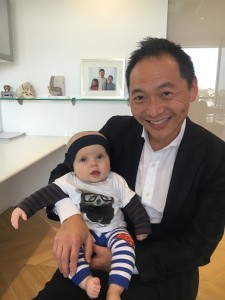 Cailin and Marc have decided to enter The Canberra Times Fun Run and have been training for the event, even though spare time is scarce for both with the demands of work and looking after three children.

“We have chosen to participate in the fun run as it’s a huge challenge for me as I don’t run,” Cailin said.

“In fact, I haven’t really had the time to do any exercise over the past four years as we have three young children, Lucas (4), Jenna (2) and Harry (8 months), but we want to show our children, Harry in particular, that anything is possible. Whilst it may not be easy and it may require lots of training, with determination, support and commitment you can achieve anything you want to achieve.” 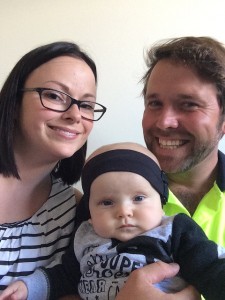 You can donate to Cailin, Marc and Harry at: